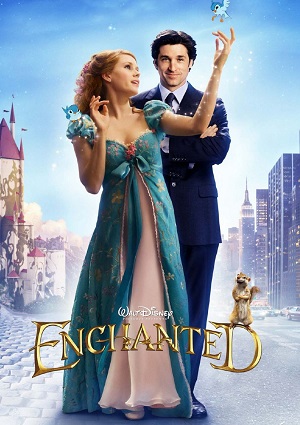 This is a classic Disney fairy tale whose main characteristic is that it occurs New York in current time, this is a story about a fairy tale princess from the country of Andalasia that an evil witch throws into the very heart of the City of New York. Soon after her arrival in this new world, Princess Giselle begins to change her way of thinking about life and love after meeting an attractive lawyer. Does her vision of ideal love have a future in the real world? It is something that we have to know. For the lovely Giselle life is a fairy tale … literally. She has everything it takes to be a perfect princess: a magnificent bearing, a pure heart, a beautiful crystalline voice and an extraordinary gift for communicating with animal… everything that is expected of her in her world of Andalasia with one catch: it’s a cartoon world.

Giselle longs with all her might to find the attractive blue prince and that the kiss that seals a true love is “for real”. It is then that Prince Edward listens to her sing with her beautiful soprano voice and he rushes to go her side. The next day, on the way to marry Edward, Giselle falls under the spell of Queen Narissa, ready to do anything to prevent the young woman from accessing the throne. Condemn Giselle to go a place that is completely contrary to the kingdom of fairies. She stops being an animated character in a colorful and musical world and transforms into a totally real woman who lands in a place that has nothing magical: the Manhattan of our days.

Robert, a ruthless divorce lawyer, and his young daughter Morgan come to help this budding princess in this strange and unknown place. When Prince Edward (who is no longer a cartoon) and his servant Nathaniel and Squirrel Pip, Giselle’s best friend, arrive in New York, both worlds collide and she begins to wonder if her vision Idealized of a romantic world in which everyone is happy can survive in our world.