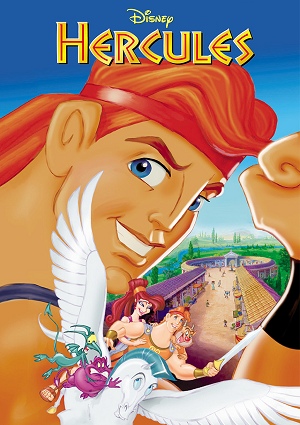 The Gods of Olympus are celebrating because the son of Zeus has been born, his name: Hercules, and everyone is welcome except Hades, god of the underworld, in consequently, he sends his aides with a potion to kill Hercules and remove it from the middle and conquer the earth with the help of the titans, but something goes wrong and they only manage to make it deadly. Years later Hercules is rejected by his countrymen and in search of help, his father Zeus contacts him and declares him a “God”, but to really achieve such merit, he must become a True Hero, which he must do with the help of Phil, hero trainer.

Hercules says goodbye to his mortal parents and heads to his training. The satyr refuses but upon receiving a thunderbolt from Zeus, he trains him as if it were his last hope of having an invincible disciple. He concludes his training and they go to Thebes, to save a declining cop, he meets Megg, his love and begins to build a reputation, Hades finds out and sends many more of his soldiers along with Megg, than in his slave since he he sold his lama in exchange for unrequited love. Hercules moves out of love for Megg and destroys every ally of the god of the Underworld.

Now Hades’s strategy is to make Hercules a mortal only for the day scheduled for world domination, the hero falls into the trap and is deceived by his love for Megg. The invasion of the Titans begins, the gods of Olympus are captured and Hercules must save the soul of Megg who floats in the Underworld, by risking his life for her he becomes a God, rescues the gods from the hands of Hades and destroys to the Titans. Being a god, everything can do it, but he prefers to leave life on Olympus and stay as a mortal, along with his beloved Megg, Phil and Pegasus.