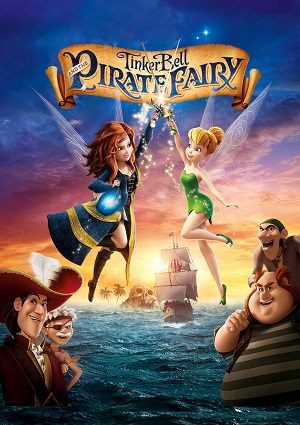 When the misunderstood fairy Zarina steals the Blue Pixie magic powder from Pixie Hollow’s hands and escapes, Tinker Bell and her friends must embark on the adventure of their lives to return the fairy dust to its proper place. But this task will not be so easy to achieve and below we want to explain why this great adventure begins. The Pirate Fairy an adventure of swordsmen and about Zarina, an ambitious and intelligent fairy dust guardian fairy who is fascinated with the magical Blue Pixie dust and its infinite possibilities.

Zarina gets into a lot of trouble because of her wild ideas. She escapes by flying out of the Fairy Hollow to join the Skull Pirates, who make her the captain of their ship. All of this after Zarina, when she wanted to try her new invention, accidentally caused a plant’s roots to grow enormously until it reached the fairy dust distributor, doing severe damage. All this happens but the adventures continue. After all that has happened, Tinker Bell and her friends must embark on an epic adventure to find Zarina, and together they will fight sword to sword against the gang of pirates who pretend to do their will, led by a cabin boy named James, who will soon be known with the name of Captain Hook.

Tink tries to convince Zarina to return to the Land of the Fairies, but she refuses since nobody appreciates her talent, reason that motivated her to leave that place. Tink and her friends just hope to put on a wonderful performance to the audience at the Four Seasons Festival in Fairyland, each using their original talents. Can they do it? Or will Captain Hook’s presence be an impediment with his unknown ship at sea? You can’t miss this adventure at sea!!