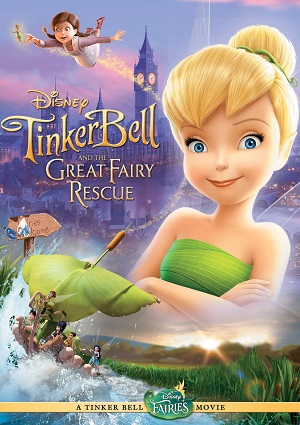 When Tinkerbell is discovered by a little girl, her friendly fairies venture out on a risky journey to rescue her, and right here is where the story begins. During her summer stay, Tinkerbell is accidentally discovered while investigating the little fairy house that a girl had made with her own hands. While the rest of the fairies organize a great rescue operation in the midst of a fierce storm, Tinkerbell forges a very special friendship with the lonely little girl. Determined to repair the relationship between the little girl and her absent father, Tinkerbell rejects the rescue of the fairies to help her new human friend, putting her own safety and the future of all fairies at risk. Do you want to know more about the story? Continue reading:

Around the year 1880, on a summer day, an English boy goes deep into the forest to draw pictures of nature. Suddenly the boy sees a little fairy! The creature hides, but is finally encouraged to come out when the boy gently convinces her. Full of enthusiasm, the boy returns to his village and tells a friend about his discovery. The news circulates quickly through the village and, at dusk, dozens of fairy hunters flock to the forest. The boy tries to stop them, but – in the midst of the commotion – he drops his torch and unleashes a fire that destroys the place. The fairies flee from there never to return.

The next morning, the townspeople observe the remains of the forest and blame the little one for its destruction. The boy’s father is angry with him for saying that he saw something impossible and reminds him: “Fairies do not exist!” Twenty years later, the forest has recovered and the fairies are back to bring summer. While the fairies settle in, Tinkerbell explores a house that appears to be abandoned, looking for lost objects. Upon finding her, the terrible Vidia threatens to tell everyone that Tinker Bell has broken the most important rule of the summer camp: get close to humans. The fact that Tinker Bell does not consider his behavior risky infuriates Vidia, who believes that Tinker’s recklessness will put all fairies at risk and unfortunately, she is right. Something is about to happen where true friendship will be tested.