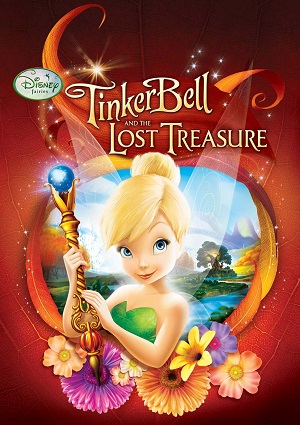 Tinker Bell and the Lost Treasure (2009)

Starting in the fall, Tinker Bell is commissioned to create a scepter to house a magical blue stone that will help rejuvenate the Fairy Dust Tree. With the help of Terrence, he makes the scepter. When it was almost ready, it accidentally breaks when a compass Terrence brought over it. The angry fairy blames Terrence and tells him to go away, leaving telling him that he won’t help her anymore. Angry Tinker Bell kicks the compass causing it to fall onto the enchanted stone and break into pieces. Tinker Bell is frightened by the fact and goes to ask Fairy Mary if there was another enchanted stone (without previously telling her that the first one had been broken). She tells him that that’s the only one they could find.

Tinker Bell believed that there would be no solution until fairies tell the legend of a magical mirror made by fairies that grants three wishes. This mirror was used by the pirates and they only had one wish, however their shipwrecked before they could ask for it. Tinker Bell and she is sad because she has no scepter. So Terrence pulls out the parts from his scepter and together they decide to put together a new one. While in the land of fairies, the fall festival is about to begin and Fairy Mary is concerned to see that Tinker Bell had not arrived. Just moments later, Tinker Bell, Terrence and Blase appear.

Tinker Bell places the scepter on its base and discovers it. Fairy Mary faints when she sees the stone broken into pieces but when illuminated by the light of the blue moon, the stone emits a powerful glow and the whole place is covered in blue dust. It is mentioned that this was the first time that so much blue powder had been seen and Fairy Mary, already recovered, congratulates Tinker Bell for her ingenious idea. Then all the fairies march together towards the dust tree. Tinker Bell learned that there is a treasure far more important than gold and jewelry. It is a treasure that cannot be touched but that lasts forever, it is the treasure of sincere friendship.