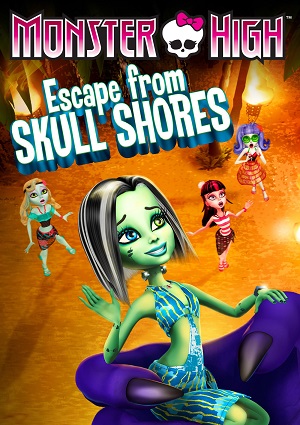 This adventure begins when the headmistress of the school comes up with a brilliant idea, to gather Vampires and the werewolves at school, but Goodblood did not count on the evil intentions of Administrator Hellscream, supported by Miss Crabgrass, who usurps the place Director Goodblood, who ends up turning into stone. These used an entire apparatus, with the intention of creating a division between the received students and those who opened the doors of the school, the Vampires and the Werewolves, generating a fight of superiority between both sides.

At the beginning there were certain differences that for the moment were overcome, Frankie and Abby were selected to welcome the new members, for which they organized a dance that made the students forget about the differences, but everything was not rosy, there was a real background to this income, which was unknown to the rest of the students. Meanwhile, Hellscream and Miss Crabgrass do their job of generating conflict between the two groups, sowing discord and increasing tension, this is where Frankie realizes that something is going on. In this web of situations, Frankie discovers that the Good Blood director has been turned into stone, therefore, she breaks into the office and steals a potion that revives the true director.

Meanwhile, Draculaura and Clawd are temporarily separated due to the events and Howleen, Clawd’s sister, becomes leader of the wolf pack, causing the exacerbation of the pride and, consequently, the confrontation with the groups of vampires. Frankie, Goodblood, Howlee, Draculaura and Abbe, find themselves trapped by the administrator, manage to break free and finally, submerged in the catacombs, Frankie with the help of Operetta try to convince the students, telling them that everyone who is there has flaws Strangers and that all must unite and be friends, Hellscream and Miss Crabgrass are turned into stone to serve as decoration in the catacombs, in this way they are victorious against evil.