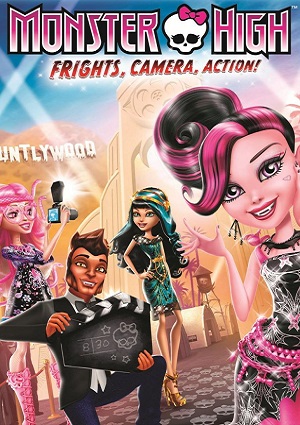 A new adventure for monster girls! This adventure is starring Robecca Steam and Draculaura, already 400 years after the last Vampire Queen disappeared in a strange way without leaving a trace, therefore, the evil Lord Stoker, seeing his position as leader in danger, decides to take randomly to one of the vampires of the Royal Court to make her pass as Vampire Queen, However, this girl with her friends is named heir to the Vampire throne, but she with her friends, discover Lord Stoker’s evil plan, realizing that the Vampire heart does not shine when touched.

Here begins the adventure of Draculaura with her friends and Hoodude, who go in search of the truth of what is happening, in this arduous investigative work, the girls find a letter and its sender is, nothing more and nothing less than, Elissabat , who is Lord’s niece and who also rarely has missing time. In this letter, she explains where the Vampire Heart is, for this, they must travel to various places such as Londoom, New Gorelean and, finally, to Hauntly Wood, to search for the legitimate Vampire Queen.

Meanwhile, in the subplot of this story, Howleen and Toralei discuss who is the best monster, Operetta suggests taquín him on a trial, the surprising result being that Ghoulia discovers that there is an actor posing as two different people, using of digital effects, in the same way they dismantle the plans of Lord, when finding Verónica Vom Vamp who is the true Queen Elissabat. Once this plot of lies is resolved, the dark plans of Lord are revealed, as a way of thanking her for having done a good deed, Draculaura receives all of his vampiric powers, and these powers are reflected at the moment that Draculaura is transformed in a fast bat. Don’t miss this adventure.