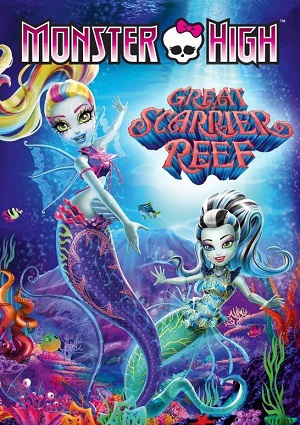 You never imagined seeing monster girls underwater! This movie starts at Monster High School, there is a party and the teens have fun, but in their fun, the teens fall into the pool. Inadvertently they fall into a very deep place and are enveloped in an extraordinary underwater world, that is, The Great Monstrous Reef, inspired by the Australian reefs and home to Lagoona Blue. Lagoona realizes that she is in her habitat, with beautiful crystalline waters, a world of coral and marine flowers, therefore, she must assume this fantastic mission, so she has to fight against her childhood fears. Once in the depths, the little monsters are turned into beautiful beings of the ocean, and they must help Lagoona to accept their imperfections.

Posea, the novice ocean goddess who is the promoter of taking Lagoona, informs her that Lago is in danger and asks her to join the fight, while Lagoona asks for help from her strange ocean friends to accompany her on this task. In this adventure, new characters appear, Pose Reef, who is the daughter of Poseidon, Peri and Pearl Snake who are daughters of Hydra and Kala Mer, who is the daughter of the Kraken, the giant squid, an enemy of the past, the dreaded beast from the depths known as the Zombitastic. In this entire adventure, Lagoona must compete in an aquatic mermaid dance contest and of course must win it.

Lagoona wins the dance competition overcoming her stage fright that affected her since she was a child and did not let her express her qualities, since her childhood she loved to dance but, when she had to do it in public, she froze with nerves, since then I don’t dance anymore, until she decided to overcome his fears by participating in the competition where she gained the advantage over her rivals. Lagoona is faced with the most feared beast and with the help of her inseparable friends she can be defeated and obtain the great triumph. Underwater and on land, Monster High are the best.