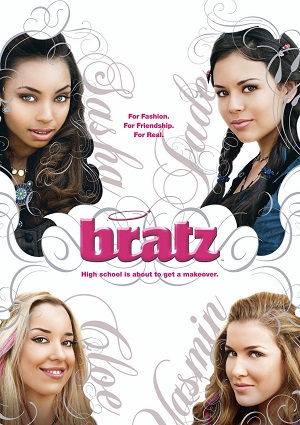 The popular Bratz dolls come to life in this movie. The flesh and blood Bratz, based on the modern and fun dolls, are going to tell us their story, and we are going to see how the four girls represent honesty, brotherhood and above all, friendship. As far as her memory remembers, Yasmin, Jade, Sasha and Cloe have always been “BFF” (Best Friends Forever). They are inseparable since they meet. The girls have always supported each other’s independent personality, their qualities, and their fabulous styles. But now the four girls enter high school and Yasmin, Jade, Sasha and Cloe will have to face a new world: a jungle of new experiences, where for the first time they discover that being a teenager means dealing with a system of social clichés, implanted by Meredith Baxter, a student bigger than them.

Little by little, our girls become more and more isolated and then they make a resolution: to form their own gang and in that way make themselves known as the Bratz to fight against the pressures and learn how the true strength lies defend your ideals, your dreams and aspirations. It is often said that friendship is not appreciated until it is tested. Of course, this is a lesson that the Bratz learn well on their journey through the problems of life in high school. However, the girls have never before been exposed to an environment governed by strict social groups in which it is necessary to fit in.

In charge of the school, as if it were a prison, is Principal Dimly, whose daughter, Meredith, strictly controls the students, organizing them into groups, and punishing them furiously if they go out of their plans. As the story unfolds, we jump two years forward, when the Bratz have lost much of the contact between them. But just when it seemed that their destinies were sealed, something unexpected happens. Cloe inadvertently leads to a pitched battle in the yard, wiping out the four girls in the principal’s office. The first time in two years that they have been together again.