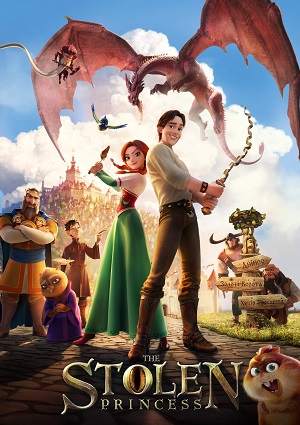 The Stolen Princess, is a story that focuses on a young representative of royalty. Her name is Mila and she captivates a young traveling artist named Ruslan, who when he meets her does not suspect that he is in the presence of the king’s daughter. But their romance will be seen threatened as a sorcerer decides to kidnap the princess convinced that the feeling that unites the girl with Ruslan will give her even more power. In the story the magician Fin is in a duel with Chornomor, an evil sorcerer who has Nina, the magician’s girlfriend, captive. After being defeated, his girlfriend becomes a stone statue and the sorcerer loses all his powers that is why he needs to regain them anyway.

Plans are interrupted when a group of knights in shining armor make their way through the plaza to reach the local castle. As soon as they arrive, Princess Mila drives them away, because she does not want to marry or settle for the life that has been imposed on her. The King tries to talk to her, but given the young woman’s denials, the man puts an ultimatum on her: she must choose a husband for the next day or he will choose for her. Mila resists and decides to flee her destiny. At nightfall, two thieves begin to follow the escaped princess, but Ruslan saves her, posing as a knight.

When Mila tells him that she wants to live his life according to his wishes and not on what others impose on him, the actor feels identified and proposes to the young woman that they undertake an adventure together. Great adventures you will live with this pair of boys, where some comic moments are distinguished in which current elements are incorporated, such as a youth magazine aimed at modern princesses, or shows that are held as if it were a stand up. This unique film fills us with freshness and carefreeness quite in the style of the newest Disney princesses.