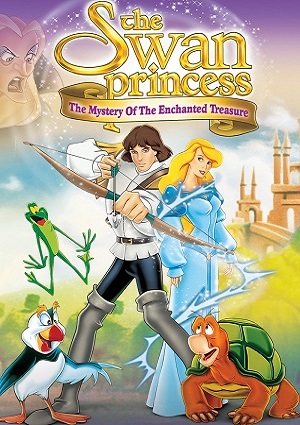 The Swan Princess: The Mystery of the Enchanted Treasure (1998)

The whole kingdom is preparing for the “Festival Day”, a day where there will be obstacle courses and a talent show. For everything, it will take place quietly since the first events that marked Odette’s life. But in parallel, Zelda, a witch that long ago He helped Rothbart to regain his powers over the forbidden arts, he is eager to possess such magic and for this he needs the notes of Rothbart (some spells) these are kept in the Swan Lake Castle, the current residence of Derek and Odette.

Zelda seeks to carry out her plans and for that she pretends to be a maiden in distress who very urgently flees from a very distant kingdom and also decides to disguise Whizzer as a bat in order to carry out her plans with her help, but a great surprise awaits her too. At first, it seems that everything is according to her plans because she steals the Rothbart notes that contained the spells to obtain the power to create, the power to transform and the power to destroy. However, Zelda has not been able to obtain the power to destroy since a fragment that prevented completing the spell is required.

Completely enraged, she decides to capture Odette and demand that Derek hand over the missing fragment in exchange for Odette. Derek along with Puffin and Whizzer, who had betrayed Zelda and was now on the side of the good guys, will go to Zelda’s lair. There were Jean Bob and Odette transformed into a swan, both locked in a dome of green fire that would destroy them if they tried to escape. Derek, Puffin and Whizzer threw a rock on the fire dome, will they manage to rescue Odette? Is it possible for the evil Zelda to fulfill her plans? Will the “Festival Day” go smoothly? Don’t miss this story and enjoy with us.